You are here: Home / Archives for Transient Ischemic Attack 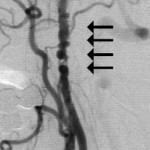 Stroke is common during the first few weeks after a transient ischemic attack (TIA) or minor ischemic stroke. Combination therapy with clopidogrel and aspirin may provide greater protection against subsequent stroke than aspirin alone.

In a randomized, double-blind, placebo-controlled trial conducted at 114 centers in China, we randomly assigned 5170 patients within 24 hours after the onset of minor ischemic stroke or high-risk TIA to combination therapy with clopidogrel and aspirin (clopidogrel at an initial dose of 300 mg, followed by 75 mg per day for 90 days, plus aspirin at a dose of 75 mg per day for the first 21 days) or to placebo plus aspirin (75 mg per day for 90 days). All participants received open-label aspirin at a clinician-determined dose of 75 to 300 mg on day 1. The primary outcome was stroke (ischemic or hemorrhagic) during 90 days of follow-up in an intention-totreat analysis. Treatment differences were assessed with the use of a Cox proportional- hazards model, with study center as a random effect.